The 5th Ranger Infantry Battalion was activated on 1 September 1943 at Camp Forrest, Tennessee. Thirty-four officers and 563 enlisted men joined the battalion over the next three days. Major Owen H. Carter was the battalion commander and Captain Richard P. Sullivan, the executive officer.

After four months of strenuous training in the States, the battalion shipped out of the Port of New York on 8 January, 1944 aboard the HMS Mauretania, arriving in Liverpool, England on the 18th.

Training resumed at Leominster, England, but there was some free time and the pubs got a lot of business. And, no, the 5th Rangers had nothing to do with the midnight raid on the QM truck company located just outside town in a tent city. Two months later to Scotland where the battalion endured Commando training. From Scotland to the Assault Training Center where Major Schneider joined us as the new battalion commander. Then to Swanage for cliff training. The final examinations on our training came in late April during the Fabius II landing exercise.

On 1 June, the battalion moved to Portland Harbor and boarded its invasion ships, the HMS Prince Leopold (Battalion Headquarters, "C", "D", and "F" Companies). At last, the maps, aerial photos, and sand tables had names on them: Vierville-sur-Mer, Point du Hoc, Grandcamp-les-Bains and Maisy.

At H-Hour, 0630 hours, we circled offshore waiting for a signal form the 2nd Ranger Battalion. Had they been successful in their assault of the cliffs at Point du Huc? No word. Circle. No word. At 0710, ten minutes beyond his deadline, Colonel Schneider ordered the three waves of eighteen Ranger boats under his command to divert to Omaha Beach, landing at Vierville-sur-Mer.

As Colonel Schneider's first wave, Companies "A" and "B" of the 2nd Rangers landed at Vierville, they were cut to pieces by massive German machine gun, mortar, and artillery fire. Colonel Schneider diverted his remaining forces, the entire 5th Rangers, to the east. Approximately one mile and ten minutes later, the 5th Infantry Battalion landed intact astride the boundary between Omaha Dog White and Red Beaches.

Schneider immediately ordered the battalion to proceed to rallying points by platoon infiltration. Four holes were blown in the wire that trapped the American forces on the beach. Rangers poured through those gaps in the wire and stormed the crest of the smoke covered bluffs, taking the German defenders by surprise. At this point, the 29th Division ordered the battalion to assist in establishing the beachhead rather than relieve the 2nd Rangers at Point du Huc. By late afternoon, the 5th Rangers had occupied Vierville, securing the right flank of a beachhead about a mile deep. Plans to push on to Pointe du Huc were vetoed by the 29th Division and the 5th Rangers remained in Vierville overnight defending the right flank of the beachhead.

On D+1, most of the battalion remained in and around Vierville, mopping up German resistance and defending the beachhead against counterattacks. Two companies, "C" and "D", were part of an Infantry and Tank task force attacking toward Grandcamp-les-Bains. This force advanced through the German defenses to a point about a mile past Point du Huc when heavy artillery fire and extensive anti-tank defenses drove it back to St. Pierre du Mont, just short of the Pointe. When the tanks were recalled to Vierville to help defend the beachhead for the night, the task force dug in at St. Pierre, sending out patrols that were able to contact the forces at Pointe du Huc.

On D+2, the 2nd Rangers at Pointe du Huc were relieved in an early morning attack by the Rangers at St. Pierre du Mont. Simultaneously, Companies "B" and "E" of the 5th Rangers led the attack on Grandcamp-les-Bains with the 116th Infantry and 743rd Tank Battalion putting the finishing touches on the capture of the town.

Early on D+3, "A", "C", and "F" attacked and captured the German artillery and infantry strong points surrounding the German Headquarters complex at Maisy.

The next few weeks brought a brief respite to the 5th Rangers. Training occupied most of the time. However, part of the time was occupied guarding prisoners of war at Foucarville and part guarding the west coast beaches against possible German landing operations from their forces on the Channel Islands.

On 29 August, Companies "A", "C", and "E" relieved elements of the 2nd Infantry Division northwest of Brest. Patrolling and sporadic fighting occurred over the next few days. 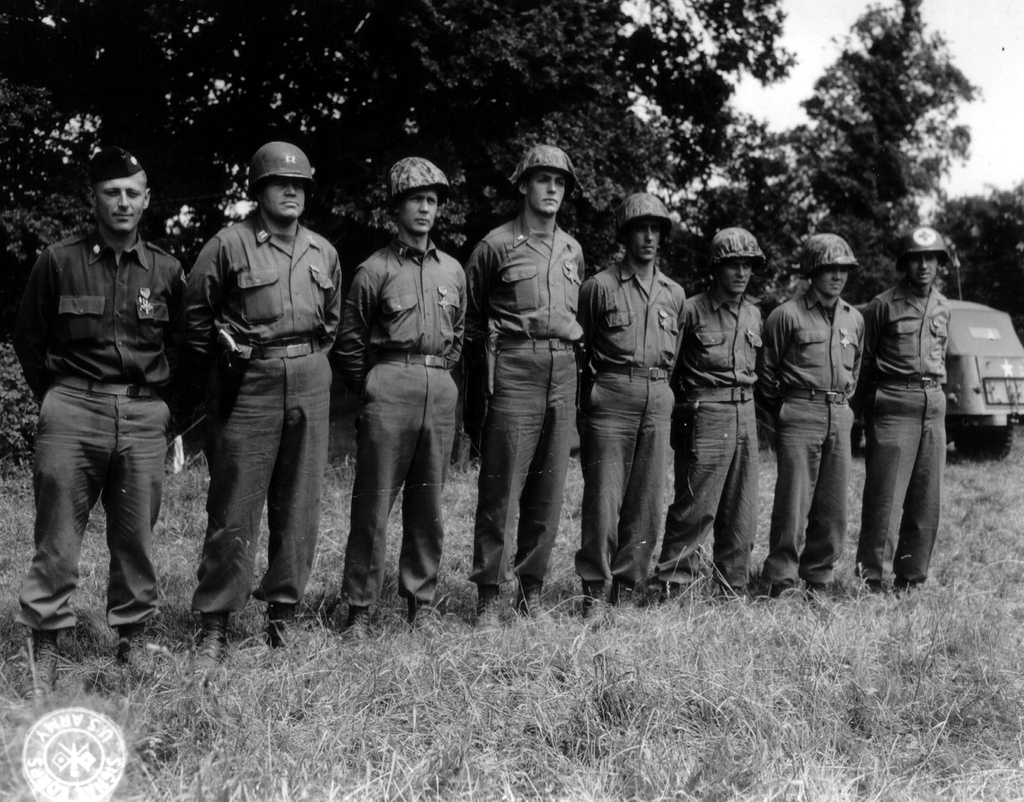 On 1 September, the rest of the battalion was attached to the 29th Division with a mission "to straighten out the lines". Heavy fighting erupted the following day when the battalion attacked Ft. Toulbrouch, the first of many forts defending Brest that were captured by the 5th Rangers. Fighting was so violent that the battalion reserve had to be committed to stop a counterattack and Headquarters Company had to be reorganized into a Ranger Company and placed in reserve.

The attack on the fort continued the next day with artillery and air support. "B" Company following 20 yards behind the strafing P-47s ricocheting bullets, captured the fort in 6 minutes after the last P-47 strafing pass.

The next day was notable when the battalion attacked another fort south of Kernies. Headquarters Company and "D" Company made the final assault, taking more than 300 prisoners.

On 5 September, Companies "A","C", and "E" rejoined the battalion as it began an attack on Fort de Mengant. In this see-saw battle, "F" took the fort with a bayonet charge.

Heavy fighting continued as the battalion moved to the Le Conquet Peninsula, west of Brest. On 17 September, Lieutenant Green led an "E" Company patrol to attack a pillbox that had resisted many attempts to capture it. One hundred thirty pounds of C-2 were placed against the pill box and lit the skies for 40 minutes.

Brest surrendered the next day and many believe Greene's patrol did the trick. Casualties for the Brittany Campaign: 25 KIA, 130 WIA, 2MIA. Total 156 or 37.5%.

The 5th Rangers moved into Belgium and Luxembourg, mostly by rail, finally ending up in and around a Marist Seminary at Differt, Belgium. Although the training cycle began all over again, there was free time to visit Arlon and Differt, where the Belgian populace were truly appreciative of their recent liberation by the Americans. There were banquets and home cooked meals. In their spare time some of the Rangers organized a soccer team which played the local championship team. We lost. All good things must come to an end, and no, it wasn't because someone stole the seminary's communion wine. On November 7, 1944, the 5th Rangers moved back into France and danger.

The 5th Rangers were attached to the 6th Cavalry Group, part of General Patton's battlefield eyes and ears. First to Toul, then Nancy, with minor patrol actions. Back into high casualty combat during the first week of December, with heavy fighting erupting in the L'Hopital, Carling, Aspenhubel and Ludweiler areas. In Lauterbach, "F" Company carried on a running battle with a Tiger tank proving conclusively that a bazooka round will not penetrate the frontal armor of the Tiger.

Patrolling with occasional bloody firefights followed for the next few days as enemy patrols grew more aggressive. And then on 21 December, following feints by "C" and "D" Companies, two battalions of artillery laid a box barrage around an objective. A raiding party from "B" Company rushed into the objective area, killed 28 enemy, wounded 25 and took one prisoner, a German officer needed for questioning by higher headquarters.

On 24 December, the battalion was relieved and moved to Metz for Christmas celebrations. Casualties for the Saar Campaign: 18 KIA, 106 WIA, 5MIA. Total 129 or 25%.

That respite lasted three days and back into combat. The Battle of the Bulge was still in full swing and the 5th Rangers' mission was a defensive one at St. Avold. The German attack on St. Avold never materialized and the battalion moved back into a training mode in early February, the battalion was attached to the 94th Division. Heavy fighting ensued as the battalion fought through Wehingen, Oberleuken, Hellendorf, and Weiten. At Weiten, the battalion received a new 48-hour mission to seize high ground behind the German lines near Zerf, this to prevent the enemy from using the road network around Zerf to counter-attack the 10th Armored Division as it crossed the Saar. By this time, 22 February, replacements had brought the battalion up to a strength of 398, 108 below TOE strength.

The following night, under cover of darkness, the battalion crossed the Saar River on a footbridge. Just prior to midnight, the battalion passed through the 302nd Infantry and began to move in two columns into enemy territory. Night movement by compass azimuth was difficult over the rugged, heavily wooded terrain. The columns were constantly harassed by enemy artillery fire and infantry firefights. Many prisoners were taken and these soon became a severe burden, but the advance kept on through thick woods that obscured any terrain features. Reaching the edge of the woods, the real fighting began. Pill boxes and buildings were captured. More prisoners taken. Enemy infantry blundering upon the Rangers attacked violently, but still the German command did not seem to realize the Rangers were behind their lines. Unfortunately, escaping prisoners brought artillery fire on the battalion. The battalion continued to move toward its objective throughout the night.

By 0800 hours on the 25th, advanced elements of the battalion reached the objective with the rest of the battalion closing soon after. German counter-attacks began immediately. Rockets, artillery, and infantry smashed at the battalion positions. Ammunition, water, food, and medical supplies ran low. Aerial re-supply efforts managed to drop some supplies within the perimeter. On the 28th, during a lull in the enemy attacks, the battalion fought its way to a better defensive position, higher ground to the south. And the Germans counter-attacked again and again. Finally, on March 3 it was over. The two-day mission had taken nine days and bled the battalion dry. Casualties for the Irsch-Zerf Campaign: 34 KIA, 140 WIA, 12 MIA. Total 186 or 47%.

On 6 March, the battalion moved to Schwebsingen, Luxembourg to rebuild with 191 replacements and a nucleus of the 180 who survived the Irsch-Zerf action. Two weeks later, the 5th Rangers entered into a new profession, that of Military Government, at first for Freidberg and then for Erfurt, Gotha, Apolda, Weimaar, and Jena.

"Day in and day out, Rangers from all six battalions watched Ranger Brothers killed, or wounded. To better understand the situation present each and everyday in combat for these Rangers, one need only look as far as the tributes from commanders.

The rifleman fights without promise of either reward or relief. Behind every river there's another hill, and behind that hill, another river. After weeks or months in the line only a wound can offer him the comfort of safety, shelter and a bed. Those who are left to fight, fight on, evading death, but knowing that with each day of evasion, they have exhausted one more chance for survival. Sooner or later, unless victory comes, this chase must end on the litter or in the grave."