After months of training at Achnacarry and an experience with live combat for a few of the Rangers in the Dieppe Raid, the entire 1st Ranger Battalion was moved to Dundee on the east coast of Scotland on 3 September 1942. Here they took part in a three-week training program that stressed attacks on coastal defenses, pillboxes, and antiaircraft positions with emphasis on planning, control, and individual initiative. This program, like the one that had just been completed, involved the use of live ammunition.

On 24 September, the battalion moved to the vicinity of Glasgow where it became attached to the 1st Infantry Division, in preparation for Operation Torch, the Allied landing in French North Africa. Four days later, the 1st Ranger Battalion took the form it would keep throughout the fighting in North Africa as a single independent fighting unit, with the exception of a few minor changes.

In Dundee they enjoyed a respite from the relentless nights in tents and actually had their first taste of home since leaving the States. They stayed with local families where they enjoyed all the comforts of home, gratefully sharing their rations with these kind people, both soldier and host ate plentiful home cooked meals in Dundee. Although training continued everyday, the Rangers were also able to enjoy some social activities during their brief evenings off. For the Rangers who never returned home, their families are grateful to the kindness shown by the civilians of Dundee for showing those Rangers later KIA in World War II, their last taste of home. 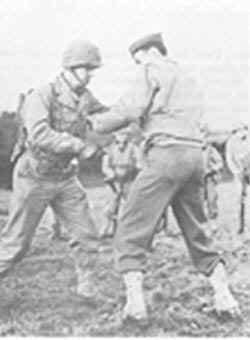 They were still Rangers in training as they moved out early each day to train with the British Commandos. They were taken by boat and landed on the rocky coastline near Dundee. The location was ideal for training in amphibious landings and also scaling the rocky cliffs off the shoreline. Although the Rangers never knew when, or where their next mission might be (and for the majority who had not been involved in the Dieppe Raid, their first mission), they felt certain it would involve an amphibious landing with cliffs to climb.

Their stay in Dundee lasted only a few short weeks. While they were there they enjoyed their stays with the local families, the entertainment offered in the pubs, and of course, the ladies. One Ranger lost his life, and another was seriously injured while in Dundee due to a freak explosion during a training exercise, but outside of this tragic event, their stay in Dundee was one many remember to this day. The town was devastated when the Rangers moved out to their next assignment. The entire population turned out to bid them farewell at the Railroad Station.

From Dundee, they were moved to Corker Hill near Glasgow. It was here in Glasgow, that they met Father Basil, a Roman Catholic Chaplain. Father Basil was attached to the British Commandos, but was assigned for a brief time to the 1st Ranger Battalion. The Rangers established a bond with Father Basil that lasted many, many years to come.

The European Theater Command assigned two photographers to the 1st Ranger Battalion at Glasgow, Phil Stern and Henry Paluch. Phil Stern had worked for Life and Look magazines, and Henry Paluch was a movie producer. Paluch was eventually reassigned to another unit, while Phil Stern remained with the Rangers until he was wounded in North Africa.

Stern took many photos of the 1st Ranger Battalion that are treasures today. These photos have been shared in recent years at the Ranger Reunions and offered for sale at their Silent and Live Auction events. Stern's photos and reports won great recognition for the Rangers as an elite force conducting Special Operations at the onset of United State’s involvement of World War II.

Training continued for the 1st Ranger Battalion in pre-invasion exercises throughout the month of October. They trained and prepared for Operation Torch, to be executed in North Africa in November of 1942.

Ranger Favorite, Father Basil highlighted:
The Initial meeting with Father Basil in Dundee resulted in a mutual love between Rangers and priest that lasted a lifetime. Father Bail was originally attached to the British Commandos. He was a tall slender fellow who was a British Army Captain, and also a priest.

Colonel Darby first met Father Basil when the Rangers were training at Dundee. He made a request to Brigadier Laycock to allow the Father to accompany the Rangers on their first invasion, that in North Africa. His request was granted, and Father Basil was there with the Rangers prior to the invasion.

At the assault landing on Arzew, Father Basil complained to Darby that he wished to be included in the actual landing. He eventually persuaded Darby to allow him to land with Headquarters and was there afterwards to bury the first Ranger killed on the continent of North Africa, as a result of this assault.

Remarkably, during the conflict of El Guetar, Father Basil used his Italian to convince the Italian soldiers to surrender, and was awarded the Silver Star for this deed. During this campaign in North Africa, the British located Father Basil and demanded he return to the UK, he ignored this order. The British then cut his pay to force his return, but still he remained with his beloved Rangers. It wasn’t until he was threatened with a Court Martial that he finally broke down and returned as requested. It caused him great anguish to leave his beloved Rangers. The Rangers, in turn, were equally saddened over his departure.

Father Basil collected an offering among the Rangers several times, the Rangers were always very generous. With a portion of this offering, he had a chalice made and engraved First Ranger Battalion. After his sad departure from them, he did return to see the Rangers one last time somewhere in Italy before they entered Cisterna. He brought the chalice with him to use for communion. He carried this chalice with him and used it in mass for years after war’s end, some 50 years after war’s end. The search for the whereabouts of this chalice continues to this day.
(If you know the whereabouts of this chalice, please contact us!)

The Ranger language mortified Father Basil, especially when they used the Lord’s name in vain. The Rangers loved this man and made every effort to clean up their combat seasoned language. There were several methods employed by the Rangers to accomplish this, usually it came in the form of a fine.

Outside of a short stint in Naples, Father Basil was involved in other areas of the war. No matter where his assignments took him, he stayed in touch with his Rangers through letters. In 1961, when the Ranger Battalions Association of World War II held it’s biennial Reunion in Baltimore, MD, Father Basil and the Rangers met once more. He was located at Loughborough University, teaching philosophy. The Rangers immediately invited him to attend their Reunion. Father Basil wrote his superiors requesting a leave and an opportunity to reunite with his Rangers. Permission was granted and thereafter, he attended many biennial Reunions in the United States. Father Basil was the primary speaker at his initial Reunion with the Rangers in Baltimore.

Father Basil was eventually inducted into the Ranger Hall of Fame, an unusual honor for even a Ranger. His induction was not as an honorary member, but as an actual Ranger. Father Basil passed away in the early 1990’s and is greatly missed by many of the Rangers of the 1st, 3rd, and 4th Ranger Battalions to this day.

If you have something to offer the timeline, please Contact Us