Monument and Plaque Dedication Weymouth – May 2003

On the left is George "Jimmy" Green who was instrumental in arranging for the Ranger Plaque at Weymouth. He is also instrumental in getting broader recognition of the LCA flotillas.

The dedication also included a veteran's parade, which took place in Weymouth on the preceding Sunday with 2700 marchers and numerous bands. Weymouth was full of British and American flags for the week. The photo and information was kindly shared and credited to long time friend to the Rangers: 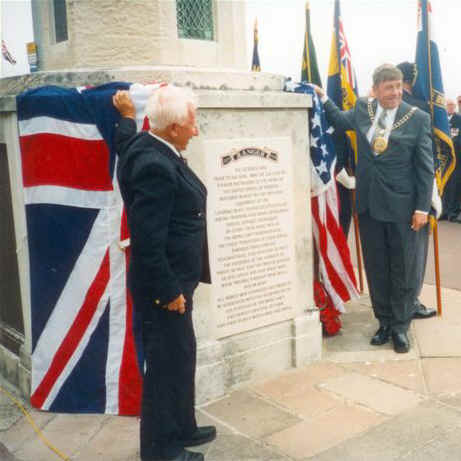 11th October 2002
Prior to 6th June, 1944 the 2nd and 5th Ranger Battalions of the Army of the United States of America depended heavily on the Landing Craft Assault (LCA) Flotillas during training and while developing special assault techniques on D-Day.

The Royal Navy demonstrated the finest traditions of their service through their courage, steadfastness, and devotion to duty. The success of the assaults at Pointe du Hoc and the Omaha Beaches of Dog Green, Red, and White were made possible through their skills and bravery.

All World War II Rangers are proud to be associated with the veterans of the LCA flotillas of the Royal Navy and remain grateful to them and their vessels both large and small.