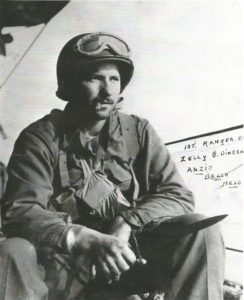 Pfc Zelly Dineen, captured at Cisterna. Deceased 2006 at age 94. He told his daughter he was a Ranger and was captured, but that's all he ever said - until it was almost too late. She wrote on a Ranger guestbook site in 2004 that her father was a Ranger and she asked for information. She told me he had begun talking about his Ranger experience, but she could not understand what he was saying. She feared he had dementia because he said that General Roosevelt was with them in Italy and she knew that Roosevelt was the President. She said he talked about a sergeant Hehaw and a Captain Miller. He never knew another ranger after the war, did not read anything about rangers and had no ranger friends. I told her that her father was in the 1st Ranger Battalion, E Company. That he was at the battle of Cisterna. That his first sergeant was Sgt. Robert Ehalt, and that his company commander was Captain Beverley Miller. She broke down. I asked if he would talk to me. He did. Over several conversations we developed his story. I’ll tell a few pieces of it.

Our conversation wandered all over the place, with Zelly telling me about growing up cutting trees, being in mountain fighting in Italy, being captured, mostly about escaping during the death march from the POW camp. I realized right away that I could not get by with asking questions, so I tried to lead him from time to time. After our third conversation I had a pretty good idea of why his daughter could not understand. Zelly was no longer able to connect all the dots in a straight line because he had suppressed them for 60 years. He did not want to remember - and that's the problem with getting a lot of the older rangers to talk about their past. Rather than make him try to remember the details in order, I made notes, then put them in chronological order and wrote his story for him. Here is part of it.

He wanted me to have the photo of him on board ship heading to Anzio - was very proud of that, holding his fighting knife. He did not know a lot of the other men in his company, or else he just did not remember their names, but perhaps that was also suppressed. He talked about how fierce the fighting was on the way to Cisterna. Perhaps he did not know it at the time, but E Company was right behind F Company, on the point almost into Cisterna. He said he saw a lot of men hit and killed. They ran out of ammunition and had to surrender of die because they were heavily outnumbered. He was physically in close proximity to Sergeant Robert Ehalt who made the last radio transmission to Colonel Darby. Mr. Dineen could never say if he heard the radio call or if he heard about it, but he knew all about it. Then he remembered the next few days moving from holding camp to holding camp, then the march through Rome, and finally the trip to Stalag 2B in Poland in box cars - how he thought he would die on that trip that took several days with almost no food or water.

Ranger Zelly Dineen would not say much about Stalag 2B except that if you worked they fed you enough to barely keep you alive. He worked on a farm, as did many others. In late January or February ( he was not sure - but this was the same winter of the Battle of the Bulge - the worst winter in Europe on record ) the Germans began moving the POW's on foot for hundreds of miles on a death march to escape being rescued ( perhaps ?) by the Russians. He escaped with two other men, neither rangers. They lived off the land and it was so difficult that one left his group to return to the march. He and the other hid by day and walked by night. One morning they awoke to the sound of German armor starting the engines and realized that the night before they had walked into a German encampment. They lay there for hours not daring to move and eventually the enemy moved off. The details of his escape are nothing short of miraculous. His partner later joined another group, and Zelly Dineen ( now by himself ) survived by stealing from farmers and trading with others. One day he was near a road and a British jeep came near enough that he hailed it. He was almost shot, but he convinced them he was an American Ranger. That was his ticket home, and he never wanted to talk about it or think about it again. He was a very courageous man, salt of the earth. Rest in Peace Ranger Zelly Dineen. ( Bob Black lists him as Kelly Dineen). RLTW