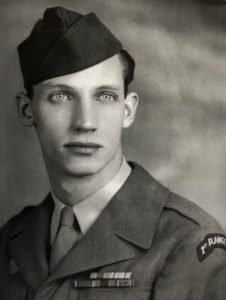 William David Zartman of Cohasset, MA, died on April 12, 2018. He was the loving husband of Carole Zartman for forty years. Bill joined the Army, in 1942, and became the youngest member of Darby’s Rangers, America’s elite fighting force in World War II. He was wounded at one of most important and costly battles in American Military History; The Battle of Anzio. He was dispatched to a German prisoner of war camp in East Prussia, Stalag IIB, which has been described as one of the most brutal internment camps in the Reich. He escaped from the camp almost a year to the day since his capture in 1945. Bill reasoned that since he would have to cross German lines to reach friendly forces, he and a British POW decided to head East. They headed for Lodz, Poland, then walked a thousand miles on foot and in empty Soviet boxcars to the Black Sea port of Odessa, where they came across Allied ships delivering lend lease supplies to the Soviet military. They were able to board a tanker bound for Istanbul, Turkey, then a freighter to Naples, Italy. There on March 27, 1945, Bill reported to the American Peninsular Base as a returned MIA. He was soon on his way home. He published a book about his experiences called: EAST TO THE RUSSKIES. Bill’s postwar experiences included management positions for the National Cash Register Company (NCF) and ITT-Sheraton World in Boston, where he managed hotel computer systems. Bill enjoyed many hobbies including tennis and golf, but especially sailing his Cape Dory around the Boston Harbor. Bill was the son of Monroe Zartman and Effie Zimmerman of Shamokin, PA.. and was predeceased by brother Monroe (Bud), sisters Helen, and Catherine Stank. Bill is survived by son Bill Zartman and daughter-in-law Maryann. His daughter, Bonnie Dingler and son-in-law Denny, his adopted daughter, Diane Zartman and his stepson, Leon Merian, and wife Camille. He is survived by 6 grandchildren – Josh, Jennifer, Emily, Adam, Nichole, Gianna, and Luke, and great-grandaughter, Ava.