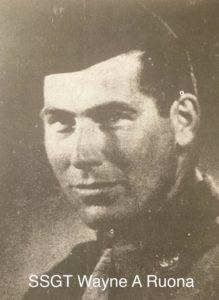 Wayne Archibald Solomon Ruona was born on November 7, 1914 in Franklin, MN to Hjalmer and Wilhelmina Pajari Ruona. He grew up and attended country school near his home. He joined the Civilian Conservation Corp at the age of 19, and worked with them for one year. Wayne served in the U. S. Army from 1941-1945. He fought in Europe and Africa as a Staff Sergeant in the 3rd Division Ranger Battalion, where he was captured and held prisoner by the enemy for 14 1/2 months before later escaping and reuniting with allied troops. On January 2, 1946 he was united in marriage to Lorraine Ehlers in Hector, MN. They lived on the campus of the University of Minnesota, where Wayne attended school, earning a Bachelor of Science Degree in Animal Husbandry. They moved to Detroit Lakes, MN in 1949, where Wayne worked for the Becker County Soil and Water Conservation District. He retired in 1971 and ran for the U.S. Senate in 1972.

Wayne loved to travel, dance, and read. He attended many of his Ranger Battalion Conventions. He was also formerly active in the Congregational Church. He was a member of Kiwanis, 4-H, NARFE, the VFW, and the DFL Party.

He was preceded in death by his wife Lorraine (2006); one daughter, Gwen Ruona; one granddaughter, Jennifer Mindermann; two sisters; six brothers; and his parents.