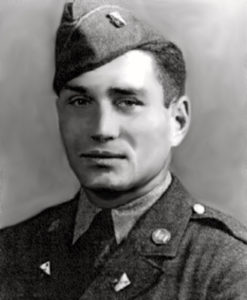 0407-CRABTREE 60 EVANS E. WARREN Captain INDUCTEE 1996 Captain Warren Evans is inducted into the Ranger Hall of Fame for his extraordinary feats of courage while serving as Platoon Leader during the Djebel Berda Battle of WWII. Ranger Evans led the platoon reconnaissance over the mountain crest, identifying enemy positions and infiltration routes. This action directly resulted in hundreds of enemy POWs being captured. After conducting many hazardous night raids in rugged terrain over eight months throughout North Africa, Ranger Evans' courage and performance as First Sergeant, Sergeant Major, and Platoon Leader merited his selection as company commander when the 3d Ranger Battalion was formed. As Commander of Company F, 3d Ranger Battalion, Ranger Evans earned the Silver Star during the San Pietro Island Raid. Moving over rugged terrain, the company infiltrated and completely surprised the Germans with a ferocious attack under the cover of rain and darkness. During the infamous battle of Cisterna off the Anzio Beachhead in Italy, Ranger Evans maneuvered his company to the sound of battle and attacked into a numerically superior armed German force. Ranger Evans was taken prisoner, but his heroics would continue even after his captivity. After two failed attempts, Ranger Evans successfully escaped and returned to American lines near Liepzig, Germany. In October 1992, Captain Evans was selected as Honorary Sergeant Major of the 75th Ranger Regiment for extraordinary service during combat.

Sergeant Major Evans was born in Aberdeen, South Dakota on December 29, 1918. He graduated from Central High School in 1938 with honors. To this day, an award being his name is given to the outstanding male student who excels in academics, athletics, and music.

While attending South Dakota State University, on an athletic scholarship, Sergeant Major Evens enlisted in the National Guard to earn spending money. He was federally inducted February 19, 1941 and shipped to Camp Claiborne, Louisiana where he was a private with Company B, 109th Engineers, 34th Division.

Less than a year later, when war was declared, Sergeant Major Evans, now wearing the rank of staff sergeant, was shipped to Northern Ireland. Sergeant Major Evans found his duty assignment un-challenging until he received a call for volunteers for a “commando type” unit, where he became First Sergeant of Echo Company, 1st Ranger Battalion. Shortly thereafter, he became Battalion Sergeant Major until November 10, 1942, when he became one of the first recipients of a battlefield commission under the European Theater.

After returning to the United States and marrying his college sweetheart, Frances, Sergeant Major Evans ended his career in the Army on January 6, 1946, having served his country honorably in war.

His awards and decorations include Presidential Unit Citations with Oakleaf Clusters, the Silver Star, and the Ranger Tab.

Sergeant Major Evans was inducted into the Ranger Hall of Fame in 1996. He relinquished his role as the Honorary Sergeant Major of the 75th Ranger Regiment January 2008.

Book: "Heroes Cry Too": A WWII Ranger Tells His Story of Love and War by Marcia Moen..... a first-person dialogue, is the story of Captain Warren Evans - a WWII 1st Battalion Ranger......

Warren E. Evans, 96, of Huntingburg, passed away July 6, 2015, at The Springs at Tanasbourne senior living center in Hillsboro, Oregon.

He was born December 29, 1918 in Aberdeen, South Dakota, to Earl Edward and Stella (Soliday) Evans. He married Frances A. “Fran” Wheeler on August 5, 1945 at the United Methodist Church in Brookings, South Dakota.

Warren was a salesman for Ralston Purina; after his retirement from Purina he was employed as an accountant at the Olinger Construction Company in Huntingburg for 10 years and then continued private accounting thereafter on a part-time basis.

He was a member of the Huntingburg United Methodist Church, Dubois County Masonic Lodge #520 F&AM, the 33rd degree of the Scottish Rite, and the Ranger Battalion Association.

He served as a Captain in the United States Army during World War II. He was a member of the original Army Rangers which spearheaded five landings and six campaigns during the war. Warren fought in every battle of every campaign that the Rangers participated in during World War II.

He was preceded in death by his wife, Frances A. “Fran” Evans, who died November 10, 2009; two sons, Brad Evans and Bruce Evans; one sister, Lorraine Theck; and two grandchildren.

He is survived by;
One son
Two daughter-in-laws
Four grandchildren.

A memorial service for Warren Evans was held on
October 10, 2015 at the Huntingburg United Methodist Church in Huntingburg, Indiana, with a reception to follow.

Pastor Lee Campbell will officiate at the service.

Interment of his cremains has taken place at the Greenwood Cemetery in Brookings, South Dakota.