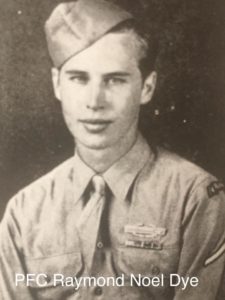 A memorial ceremony will be held on April 9, 2015 at the National Ranger Memorial on Fort Benning, Georgia. The family of Ranger Dye invite you to attend the memorial ceremony, which will begin at 6:00 p.m.

Ranger Raymond Noel Dye was inducted into the Ranger Hall of Fame in 2010. According to his Ranger Hall of bio, Private 1st Class Raymond Noel Dye joined the Army November 12, 1942 and was a member of the Armed Forces at Fort Knox, KY. He shipped out to Oran, North Africa in April of 1943 and volunteered under Col. Darby. He was assigned to the 1st Ranger Battalion until just before the Sicily Invasion. With the 4th Ranger Battalion, he made three invasions to include Sicily, Salerno and Anzio, Italy.

The 4th Ranger Battalion made a 12 mile raid behind the German lines where his Ranger Buddy Charles Roby was killed in action on November 4, 1943. At Chiunzi Pass, Ranger Dye was chosen to join a British observer to pinpoint targets for naval guns that netted the explosion of the German Ammo Depot, among other targets. Going AWOL from hospitals on two occasions to return to his Rangers, he fought until he was wounded a fourth time at Anzio.

Noel Dye was a founding member of the U.S. Army Ranger Association, serving as a Life Member since the association’s charter on June 13, 1973. He was the last WWII era founding member. He will be missed by all members.

I remember this winter very good. We fought our way from Maiori to Naples. We Rangers had a buddy system, and two lived as one. Charles Roby and I were such a pair. We were buddies every hour; day and night.

Upon reaching Naples, our fighting was over for a few days and we were sent to Sorrento for R&R, which included a 10 mile speed march every day. After about 15 days in Sorrento, we were, on Nov. 2, given orders to move out the next day. Most of the guys, except for Roby, went out for a night on the town. Roby didn't drink, but he knew where to find me that night and came to get me at closing time as we were being kicked out. He said that he wanted to talk to me. Needless to say, I had been drinking, but he made me understand, after some time, that he had arranged for us to go and have our picture made together. At first I refused.

I told him that he must be nuts; that there was no place to go for a picture. Again he said, "Yes, I have it all arranged." I asked, "Why?" He said that he knew where we were going the next day, and that he was not coming back from this raid.

I told him that he was crazy. He said, "No, I am not coming back and I want to have this picture made." By this time I agreed to go with him because he seemed so serious about it. Now it is early in the morning, Nov. 3, and as I found out, he had not made arrangements. We woke up these people at their studio and Roby had the man and woman take our picture. They got our address to mail the pictures when they were ready.

At point there was no more drinking for me. Roby and I went back to the schoolhouse and turned in.

Just a few hours later we were loaded into trucks and went to a small town north of Naples. Captain Nye told us to rest because we would not be getting any sleep that night. It was around noon when Captain Nye turned to Sgt. Altieri and said, "Get Dye and Freemire. We have a job to do." So much for my rest.

We went to Battalion HQ where we met with Col Murray, another officer, a Sgt. and two Italian partisans. We were to be the scouting party. We went approximately 3 miles behind enemy lines and the Italians showed us the way up the mountain. We went back to rejoin the Battalion to get ready to complete our mission.

As we started this raid, that was to go 12 miles behind enemy lines, F-Co 4th Ranger Bn. led the way up the mountain, single file.

It was good going until daylight. When the Germans saw us they opened fire. E-Co 4th Rangers were to our left and were in serious trouble. With Sgt Altieri in charge we circled around to help. In doing so we came upon an open field. We had to cross it to achieve our objective. The field had a slight slope, then dropped off. Past the drop off was a fence that we had to also go over.

We made our way about 2/3 of the way across the field when we started taking a lot of small arms fire. We found as many low spots on the ground as we could for cover. As we lay on the ground, our packs and canteens were being shot off. The Germans then started with mortars. After the second shell, Sgt Altieri had us sound off, in order as usual. No one had been hit. Sgt Altieri then called us by name, two at a time to get across the last part of the field and into the woods. We ran toward the woods. Roby was heavier than me and carried a Thompson sub machine gun with ammo. Roby was on my right as I ran past him and dove across the fence. The mortar barrage continued as I lay on the ground trying to catch my breath. I crawled back into the woods where it would be safe enough to stand up. I called out for Roby but there was no answer. I asked others around me,"Where's Roby?" No one knew. Finally someone pointed toward the field.

I had forgotten about the picture and what Roby had said until that instant, when it all came back. It had been approximately 32 hours since we had our picture made. I walked to the fence where I could see Roby clearly. He was on his back with his feet facing me as I walked out onto the field and sat down beside him. Still holding his Thompson and holding an extra clip in his hand, I reached and touched him. We had made a pact that we would get our personal papers from the one who had fallen and return them to the family. I got the waterproof packet from his right breast pocket and zipped up his jacket. It was then that I remembered that I had to get his dog tags. I started to get Roby's dog tags and in doing so, I looked down at his face and blood trickled from his mouth onto the left side of his face. The sun was shinning; the sky was blue and not a shot was fired. I got up and walked off of the field and took his personal packet to Sgt Altieri. I told Sgt Altieri that I had not gotten the dog tags. He said that he would take care of it for me.

Roby was buried in the Alban Hills with one of his dog tags.

We won that battle and more, but we were leaving our buddies behind.

The picture that had been taken caught up with me at Lake Lucreno. Either Lt Randall Harris or Lt James Lavin gave the picture to me and it just killed my soul when I saw it.

How could Roby have known?

How could he have been so sure and still do what he knew would kill him?

TO ME, THIS IS A REAL HERO!

I was out of the war at Anzio. I was blown up in a farmhouse along with Col Murray and others and sent back to the states.

Several months later I went to Toledo, Ohio to see Roby's family. They owned a bar called ROBY'S TAVERN. When I walked in, there was in front of me, behind the bar, a life size picture of the one Roby and I had taken back in Sorrento. The emotions can hardly be expressed, even today.

I was greeted warmly by Roby's family. How did they know it was me; a man they had never laid eyes on? Because of the picture on the wall of two Rangers, their son and me, Noel Dye.

I couldn't tell them the circumstances surrounding Roby's death. There was so much celebrating and joy surrounding my meeting them and them me that the story was never told.

In 1995 I returned to Ohio to find Roby's grave after a trip to Italy and Normandy. He was not listed as being buried in Europe, so I continued my search in the states.

The tavern was sold long ago, but is still called Roby's Tavern. The new owners put me in touch with the previous owner that bought it from the Roby family. She, without hesitation, gave me the telephone number of James Roby ( Charles Roby's son), when I told her what I wanted.

I called James Roby. He met me in Toledo, and I told him the whole story. Remarkably, James Roby's granddaughter looks just like Charles Roby, her Great-Grandfather. It was like looking in to the past. James then took me to say good-bye to my Ranger Buddy.

After 62 years, with some memories better that others, I can still feel the sun on my face and the smell in the air on that crisp November morning in 1943 as I lay next to Roby on the Battlefield.