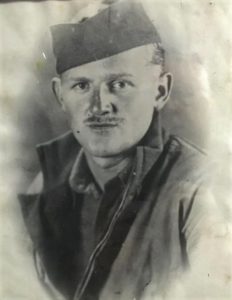 Volunteered for Rangers in Bizerte, Tunisia
And trained for a month in Corleone,
Sicily. Captured Cisterna Italy Jan 30th,1944.
Held at Prisoner of War camp 2B then
Liberated after 52 day march in Oglethorpe
On Apr 13th 1945.