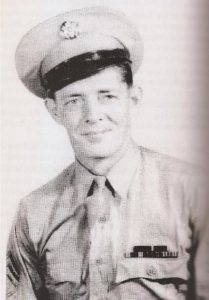 James R. (Rusty) Rorex,96, passed away January 29, 2018. Born October 11, 1921 to W. H. (Bill) Rorex and Elizabeth Turner Rorex, Rusty loved his family and friends dearly. As a young man he was well known in downtown Greenville as deliverer of the Greenville Herald Banner to all the merchants. He always told the story of how much money he made on his job when he was the only available person to deliver the “Extra” -the Banner printed the day notorious Bonnie Parker and Clyde Barrow were killed in Texas.

A lover of music, he was always inspired by his brother Kyle who later traveled with Big Bands as a Bass player. In school Rusty was always in the bands, being a student director. His happy times were being associated with Gussie Nell Davis, teacher of the Flaming Flashes, and seeing her later form the world-famous Kilgore Rangerettes. He also was active in civic clubs being a DeMolay and Jr. Chamber of Commerce member.

Rusty attended East Texas State, Commerce, pledging OGEMA. He was employed by International Milling Company, first in the office and later in sales, traveling until he went into service in 1941. He was attached to the 1st Armored Division, Ft. Knox, Kentucky and became part of the first group to leave for Europe on the Queen Mary for England in WWII. Arriving in Europe, he volunteered for a new unit being formed by a “West Pointer” William (Bill) Darby. It was an outfit to be trained by the British commandos and was to be strictly the advanced unit before any Army invasion. Rusty was the seventh man to be accepted into the training of the new division, “Darby Rangers” and heavy training began in Dundee, Scotland. Rusty was chosen from a few Rangers later to make the Dieppe raid into France and the beginning of the Rangers and the slogan “The Rangers Led the Way.”

Being injured, Rusty was in a field hospital in North Africa, but he was also first to make invasions in North Africa, Italy and Sicily. He received the Purple Heart, five major Battle Stars,

Bronze Star, French Croix DeGuerre and the Presidential Citation among other medals. Rusty served in Headquarters Co., 1st and 3rd Bn. Returning to the United States, he was in the V. A. Hospital until he was honorably discharged.

Having married his childhood sweetheart, Dora Jean Burt, he joined her in Greenville and entered the retail grocery business with his father. Moving to Dallas in 1955 after selling his business, he began a career with J. M. Smucker Co. for 20 years as District Salesman for 13 states and then, was employed by Nesco Food Brokerage Co., Dallas. He later retired and moved to Tyler where he began a career in sales for Lilly Sales, Mineola, Texas and remained until he return to Greenville in 1995.

Rusty was a member of Ridgecrest Baptist Church. He was preceded in death by his wife Dora Jean in 2012, his daughter Patricia Lynn in 2005, his parents Elizabeth and Bill Rorex, his sister Lillian Laney in 2017, sister Helen Marie Chapman, and brothers Howard and Alexander Kyle.