Our RangersBrothers Jack and William Anderson 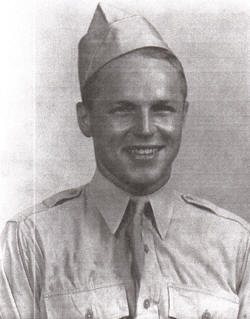 My grandfather, Jack D Anderson, transferred to company F of the 2nd Ranger Battalion on December 2, 1944 so he could be with his brother, Pfc William E Anderson.
Jack Anderson and his brother William both died December 7, 1944 at Hill 400 as "F" Company, 2nd Battalion Rangers. They were returned home and buried side by side (see photo below).

Excerpt reproduced with permission from the Ranger Hall of Fame

Ranger Anderson was inducted as a distinguished and courageous Ranger leader. Private First Class William E. Anderson "Andy" served with distinction in both the first and second sections of first platoon, Company F, 2nd Ranger Battalion. His exploits during the D-Day invasion and follow-on missions made a permanent impression on his fellow Rangers.

Andy was part of the force who climbed Point Du Hoc and participated in the Brest campaign. It was during the Brest campaign that PFC Anderson posthumously earned the Silver Star. The last major battle of the campaign was for Hill 400. Andy had just delivered a killing blow to a fortified shelter near the crest of the objective and was pulling off when he was thrown backwards by the blast of an exploding shell.

Private First Class Anderson later died from the wounds sustained in this explosion. Private First Class William E. Anderson's actions and devotion to duty are in keeping with the highest traditions of the Rangers. His demeanor, expertise and professional knowledge "set the example for others to follow."