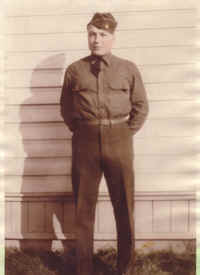 A sensational eye-witness account of the part American troops took in the battle of Tunisia is contained in a letter received this week by Mrs. Ralph Streeter from her brother, Austin Miller, technical sergeant with the U.S. Army Ranger Battalion. Miller is the son of Mr. And Mrs. J.J. Miller of Ritzville. The Rangers in the U.S. Army correspond with the “commandos” in the British Army.

The letter was mailed June 6 from North Africa and has been passed by censor. It reads as follows:
Now that the North African campaign is over we are able to write home a few of the things that happened. So, here goes:

You know when we landed in Africa ; we were the first to land-of all the American forces. We cleared out coastal guns so that my “old outfit” would be able to land. It wasn’t an easy job, but we did it well and so we got a foothold in Africa . We ran into the French Foreign Legion. They area a pretty tough bunch of boys, but it seems they didn’t much care about fighting.

We stayed on the coast for some time and then went to Oran and boarded a plane to Tebessa, which at that time was very near the front; and from there we went to Gafsa, which was at that time the last American outpost. By the way, Gafsa is the largest Oasis in North Africa and it is right on the edge of the Sahara Desert . While there, the Germans were coming over and continually bombing the place, which is no fun.

Hid out in hills…
From Gafsa we pulled the raid on the Italian outpost of which I sent home the clipping. It was behind the enemy lines and we had to hide out in the hill all day after the raid, for fear of a tank attack, of which we were just about incapable of handling. But the attack never came, so we got back to Gafsa safely. The German forces were back in the hills and our forces could not get at them, however, it seems that the Germans did not like the raid we pulled, so out they came in a swarm.

Two nights after the raid, the Germans started the drive of which you have probably read quite a bit about. We, “F” Company, dug in on the outskirts of Gafsa to repel a tank attack which was expected just before dark. As I sate in my foxhole that evening, I thought of all kinds of things. That was the most nerve-wracking evening I spent in my life. It is hard to explain the feeling I had. It wasn’t exactly fear, but I just can’t explain it. However, the Germans went around our position and that was the beginning of the “withdrawal from Gafsa.”

We were the last unit to leave Gafsa that night. We fought rear guard action for our forces that night and when we did finally get out, we got out as best we could. Due to the fact we had no trucks of our own; it was up to every man to get out on his own. We caught trucks wherever and however we could and got back to Furina, where we organized and straightened up our lines. In a few days we withdrew from there and again we were the last American force to leave, and this time we DID walk. We were left all alone on the plains of North Africa and before we left Colonel Darby, our commanding officer, made a speech. He said, “I have been proud to be in command of this unit and I am proud of the men; and if anyth8ng should happen today, we will go together, fighting. Things look dark today for the Ranger Battalion and the 0old saying is, “He who fights and runs away will live to fight another day,’ but we will not run, we will walk.” By this time the Germans were all around us and we started walking. We walked across the plains for 20 miles that day, a mere five minutes ahead of our enemy.

Germans on the run….
We were tired, but we kept going, stopping only once to eat our rations at noon . We walked until nearly dark until we reached Dernier Pass where we again dug in to fight the enemy. We were now the last outpost of the American forces. We were out in front of everybody holding a pass which helped to stop the last German attempt to break our lines. We held them and began our drive to the sea. Again we had the Germans on the run and this time they were kept on the run until it ended just a few weeks ago.

We began moving up-Ferianna, Gafsa, El Guettar, Maknassy. At El Guettar, all hell broke loose. The enemy counter attacked, we attacked again, we drove them off. There we saw the Germans come across a field, wave after wave of them, in a straight line, on a slow walk. They didn’t run, they didn’t crawl, but straight up and walked. The Germans use this method to break the morale of the enemy; and when one man in shot down, another steps up in his place. It is quite nerve-wracking, but we stayed in our positions and shot. Our artillery took heavy toll and the enemy finally turned around-what was left of them-and walked back at the same speed they came forward and in the same way. Our machine guns and artillery and rifles took heavy toll, and again we started driving.

British Great Fighters…
Our planes flew over every day; wave after wave of bombers and fighter planes, and the enemy was bombed and strafed until they were in full retreat. And it was then we met the British Eighth Army, which you have heard so much about, and it is one of the-if not the-greatest fighting force in the world. I am proud to say that I fought in the same campaign with them.

A short time later, we were withdrawn from the front. While we were up there, however, we did our share. We took many prisoners, mostly Italians, and they got so at last they would hardly fight. They knew it was about over, so they decided they wanted to get on the band wagon, as the Dagos usually do. Anyway, they can’t be blamed much. They were used mostly to fight spearhead and rear guard for the Germans, and sometimes when they started to run or refuse to go forward into certain death, they were shot by the Germans.

The Germans are a great fighting force. They are not to be underestimated, and the officers are plenty shrewd. I suppose Rommel will go down in history as one of the great generals of the war. However, the outcome, credit must be given where credit is due.

Glad it’s over…
We were not in on the last of it. It was mainly the British. They have been at it for four years and all we did was keep the enemy from breaking through while the English pushed them to the sea.

I am glad that it is all over with. We have been bombed, strafed, shot at with nearly every type of German and Italian gun, and had their hand grenades thrown at us. Sometimes it seemed as though we were all through, but then a miracle of some kind would happen. We must have charmed lives in this battalion. It is quite hard to explain, but it has been miraculous indeed. Now that it is all over it seems like it couldn’t have happened, but it did I reckon. I wish I had had my camera with me, but it is too late now.