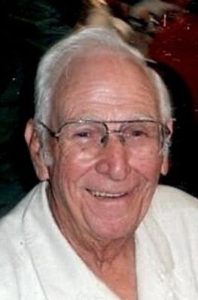 Obituary
Henry R. Seaman, 90, passed away Wednesday, November 13th at his home with his wife and daughter by his side.

He was born on July 3rd, 1923 in New Britain, Connecticut and was an Army veteran of WW II serving with the 5th Ranger Battalion in the landing at Normandy, France and Omaha Beach on D-Day and fought in campaigns in Northern France and Germany receiving the purple heart, bronze star, and numerous other awards.

Henry was a long time member of I.B.E.W. Local Union #90 in New Britain and The Business Agent of Local #37 until retirement in 1987. He was an avid fisherman and Boston Red Sox's Fan.

A Mass of Christian Burial will be held 10:30 A.M. Friday, November 22nd at Church of Our Saviour in Cocoa Beach with full military honors. Burial will be in Florida National Cemetery in Bushnell.