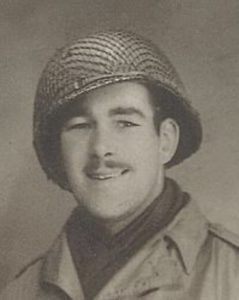 Guy Claude Shoaf was born in New Castle, Pennsylvania on 3 March 1917. He was the son of Aldwin Clyde Shoaf and Mabel Dama (Paden) Shoaf. Guy grew up with 3 brothers and 2 sisters.  His dad worked in the insurance and real estate business most of his working life. Guy attended Grammar School in New Castle. Guy graduated from New Castle High School in 1938. By 1940 he was still living home and was in business with his older brother Dale marketing retail dairy products.

Guy was inducted into the service 16 May 1942 in Erie, Pennsylvania. His draft card stated he was 6’1” and 187 lbs. He would do his initial basic training in the states. At some point he boarded a ship headed for England. He shows up in the detached service Ranger Group of Headquarters A Company pool of trainees. On 22 May 1944 Guy joined Headquarters Company. Guy was with the Rangers on D Day 6 June 1944.

Shortly after the mop up of enemy troops at Normandy Guy was transferred to F Company they were in Colombieres, France at that time. Guy had the military Occupation of rifleman (MOS 745).
The 2nd Rangers mission was to capture the German occupied submarine Port of Brest in France. On the 5th of September 1944 the Rangers need more reinforcement so more Rangers were taken from Able Company leaving 1 officer and 5 men to keep the Germans in their Kergolleau dugouts so they dressed up 14 Russians to make an appearance of strength to the dugout guarding Force.

The next day September 6 at 0830 AM the Battalion moved against the Germans at Hill 63. Behind heavy preparatory fire Baker, Dog and Easy companies attacked abreast with Fox Company in reserve. Arnold with Able and Charlie Company launched a diversionary attack. This was a day of heavy fighting under fire from German self propelled 75mm and 88mm guns. By late afternoon force Slater had gained 1,000 yds. Germans fleeing shelter ran under the guns of Able and Charlie, the latter killing 5 Germans. Twenty two more were captured of the garrison. At the close of the day the attack had killed sixty enemy and captured another forty. Only one Ranger was killed and nineteen were wounded. Ranger Shoaf was one of them. He earned a Purple Heart because of a scrapnel wound in his thigh. He was transported to the hospital and spent 6 days recovering. He was back on duty on 12th of September 1944.

Guy was transferred back into Headquarters Company while the Battalion was stationed in Belgium. He was still classified as a rifleman. By the time the battalion reached Schmidthof, Germany PVT Guy Shoaf and best buddy Jimmy Storm were promoted to PFC on 8 January 1945.
By this time they were driving light trucks and also were part of the motorcycle messenger crew.

With the war winding down the Rangers had a chance to enjoy some rest.   Then on the 29th of June 1945 the entire Pool of the motorcycle crew was sent on detached service with the 8th Armored Division. There were seven 2nd Rangers that went Shoaf, Storm, Lefferts, Myers, Berke, Stojkov and Holliday all had an MOS of 378 Motorcyclist. Jimmy Storm returned on the 20th of August and the other six returned on August 29th. They were in Holysov, Czech.

On 24 September 1945 while at Camp Brooklyn the motorcycle boys went AWOL for seven hours. The war in Europe had ended and the boys probably took a few liberties. The Battalion spent some time relaxing and getting some much earned rest. By 16 October 1945 the 2nd Rangers left Camp Lucky Strike and were transported to the Port of La Havre, France. They headed home on the USS West Point. After 7 days at sea the 2nd Battalion pulled into Hampton Roads, Virginia. They were transported to Camp Patrick Henry, Virginia. The 2nd Rangers were disbanded on 23 October 1945.

Guy returned to civilian life in New Castle, Pennsylvania and in 1948 he married Eileen Hammond. He was a partner in Shoaf Brothers Dairy and worked as a salesman for Lawson Products, a hardware supplier. He was a member of VFW Post 252 in Ellwood City and the Rangers Association. He loved spending time with his family and enjoyed reading and being outdoors.
After the war, Guy remained friends with Jimmy Storm who he knew as “Cricket.” One of Guy’s daughters remembered Cricket’s visits. She thought he was God because he was sitting in her dad’s chair with a dog in his lap and her mother, Eileen never allowed animals in the house. Another daughter looked forward to Jimmy's visits because he brought candy for all of them.  She also said Guy and Jimmy got into a lot of trouble together, they were Rangers after all!

Guy C. Shoaf died in Jameson Memorial Hospital on 3 September 2007 at the age of 90. He was laid to rest at Castle View Memorial Gardens in New Castle, Pennsylvania.