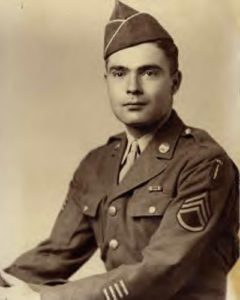 Frank A. Steele was from Oakland, California. Steele enlisted in the Army in February 1942 at the age of 21. He served in the invasion of North Africa with the 591st Engineer Boat Regiment. He joined 4th Ranger Battalion (B Company) at the time of its activation in 1943 at Nemours. He appears on the roster of 1st Ranger Battalion, but that appears to have been only for administrative purposes pending the formation of 3rd and 4th Rangers.

He was a BAR gunner in the invasions of Sicily and Italy. He participated in the invasion at Anzio and served as Platoon Sergeant after his was killed.

He was awarded the Bronze Star with V for rescuing a wounded man under fire near the town of Isola Bella during the disastrous attack on Cisterna. He was transferred to the US-Canadian First Special Service Force (FSSF) and fought with them until the fall of Rome, after which he was rotated back to the States.

Ranger Steele was discharged in September 1945. He reenlisted in 1948 and served in the Signal Corps until his retirement in 1964. He passed away in Davis, California in July 1991.