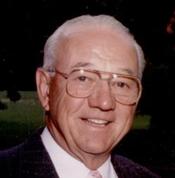 Dale William Youngern was born April 16, 1920 the son of John and Ella (Seagreen) Youngern of Doland, SD. Dale spent his childhood on the family farm, attending school in Doland where he was active in sports; the quarterback of the football team and a starting forward on the basketball team. In 1937, Dale moved to Grand Forks with the family of his basketball coach. He was active in sports at Grand Forks Central High School and graduated in 1939. Dale married Florence Brady on September 11, 1943 in St. Michael’s Catholic Church in Grand Forks. He entered the United States Army and during World War II served with Darby’s Rangers in the European Theatre. He was honorably discharged from military service and returned to Grand Forks. He attended the University of North Dakota, Grand Forks graduating with a degree in Accounting. He went on to pass the state boards for accounting and became a Certified Public Accountant. He worked alongside his father-in-law, Edward Brady and later became the managing partner of Edward W. Brady, Ltd. In 1980, through his efforts, Brady Martz and Associates PC was established. In 1980 Dale retired and he and Florence spent their winters in Hawaii and in recent years Florida, always returning to Grand Forks for summers with family and friends.

Dale was a member and past president of the North Dakota Society of Certified Public Accountants, a member of the University of North Dakota Alumni Association, served on the Board of Directors for United Hospital (Altru Hospital) along with other organizations and service clubs. He and Florence were charter members of Holy Family Catholic Church in Grand Forks. Dale’s greatest joys were his beloved wife Flo, his children, grandchildren, and great-grandchildren, and of course, golf-on any course, anywhere, having made four holes-in-one over his lifetime, the most recent at 89 years old!

He was preceded in death by his wife, Florence; brothers, Cliff Youngern, Vern Youngern and a sister, Elaine Youngern.

Contributions can be made to local veteran’s organizations for assisting returning war veterans.