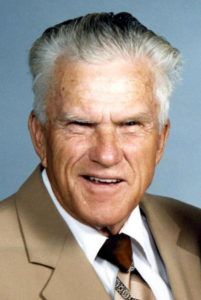 Herman F. Sack of Holland, PA died Monday, March 7, 2011 at his residence surrounded by his loving family. He was 94.

Herman was the beloved husband of 65 years to the late Frances T. Sack.

Born in Collingswood, NJ, he was the son of the late Hugo H. and Mabel M. Forman Sack and father of the late Carol-Mae F.S. Campion.

After graduating from Collingswood High School in 1937, Herman attended Camden Commercial College where he met his future bride. The Army cut short his college career.

During World War II, Herman proudly served in the US Army as an infantryman and signal technician from 1941 to 1945 with the 5th Ranger Battalion and 8th Army Division. Participating in the Normandy Campaign in Europe, he heroically fought in the Battle of Normandy, Battle of the Bulge, Battle of Hürtgen Forest, and the Battle for Brest where he was awarded the Bronze Star Medal for meritorious service during combat operations. In addition to his many decorations, he was awarded the Combat Infantryman's Badge (with two stars), Presidential Unit Citation (twice awarded), and French Croix de Guerre with Silver-Gilt Star for aiding in the successful liberation of France at Pointe du Hoc. Herman also helped liberate two concentration camps in Germany.

Herman retired in 1982 after over 40 years of service with NJ Bell Telephone, now known as Verizon. In his retirement, he and his wife enjoyed travelling all over the United States in their RV seeing the sights, winning ping pong tournaments, making many friends, and good memories. When he wasn’t travelling, Herman volunteered countless hours of his time in Brigantine helping out at the local Library and the Senior Center. He also enjoyed "hanging out" with the members of the Police and Fire Departments and visiting his many friends at City Hall.

During his 60 year residency in Brigantine, Herman was a Boy Scout Leader, member and Deacon of the Community Presbyterian Church, an Auxiliary policeman, and founding member and past Chaplin of the American Legion Post #396.

When Herman and his wife moved to Twining Manor in 2006, he fostered many relationships. Affectionately known as "Sarge", he was often seen walking the grounds and feeding the squirrels. Herman was an usher at Sunday morning services and distributed newspapers at Twining Manor.

His interests included gardening, farming and walking the "great outdoors." He loved all animals especially dogs who sensed a real friend in him. Herman was a life member of the National Ranger Battalions Association WWII and a member of the NJ Society of the Sons of the American Revolution.