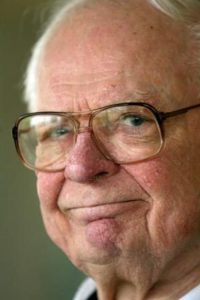 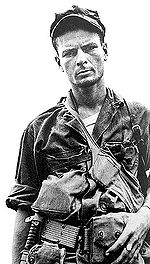 Mr. Prince graduated from Madrona grade school and then Garfield High School in 1937, and Stanford University in 1941. He was married to Barbara Harrison of Seattle on January 31, 1941. Bob entered active service as a lieutenant in the United States Army on July 7, 1941 and was discharged with the rank of major in February 1946 from the 6th Ranger infantry Battalion. He served in the Southwest Pacific in New Guinea, the Philippine Islands and in Japan. He was awarded the Distinguished Service Cross for his role in the rescue of 571 Bataan prisoners of war from the Cabanatuan Prison Camp January 31, 1945. In the movie "The Great Raid," James Franco starred as Prince, while Benjamin Bratt portrayed Lt. Col. Mucci, who selected Prince to lead the raid on a Japanese prison camp. He was named to the Army Ranger Hall of Fame. His business career involved the marketing of Washington apples in Seattle and Wenatchee for 40 years. He retired in 1985 from the presidency of Gwin, White and Prince Inc. He held several positions of leadership in the fruit Industry. He and his wife Barbara retired in Kirkland; after Barbara's death in 2003, he moved to Port Townsend. He was a lifelong student of history, an avid follower of politics, and until recently, an enthusiastic Husky football fan. Bob was preceded in death by his son Steve, killed in action in Vietnam in 1969, his beloved wife of 63 years, Barbara, and brothers Ken and Dick of Seattle. He is survived by his brother John, son Jim and his wife Mardee Stadshaug, and grand children Amy and Andrew. He will be lovingly remembered by his family and friends as a warm, generous, but reserved and humble man. At Bob's request no services were held. Mr. Prince died after a long illness at home with his family at age 89.