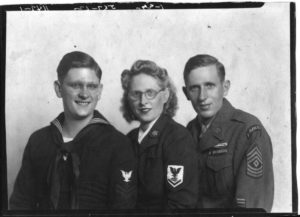 Lloyd O. Hyatt one of Darby's original 1st Rangers 'C' Co. fought all the way with his Rangers to Cisterna where captured, sent to Stalag 7A in route to Stalag 2B. Marched out to the west in the winter of 1945 he was liberated by British Commandos, sent to Camp Lucky Strike, shipped home from LaHarve France to Camp Chaffee, AK recovering from the effects of starvation. He was demobilized in August 1945 immediately joining the reserves. In November 1949 he returned to active service and was in Korea by January 1950 where he was wounded. In January, 1962 he died or a heart attack while again serving in Korea. He's interned in the military section of the Hibbing, MN. cemetery. In this photo shortly after his return home is a brother and a sister that also served in WWII.