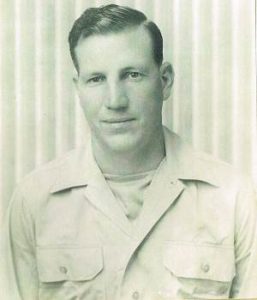 Luzon Aparri: From the Book, Rangers In WWII by Robert W. Black, “The Ranger operation at Aparri had been preceded by a hazardous four man volunteer patrol. Lt. Lawrence Evans, Sgt. Delbert Griffith, Sgt. Oliver Williams, and Pfc. Eli LaLande crossed the Cagayan River at night and reconnoitered Japanese positions in the city of Aparri. The men then brought the company into action and led the assault. Each man received the Silver Star” (p 321). 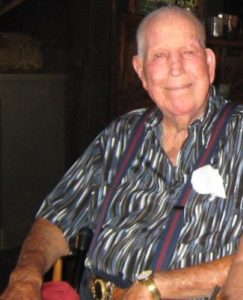 Delbert was married to Evelyn for 64 years. She was his strength and resolve. She helped him transition from a warrior to a good husband, father, and a man of faith and charity. They had three children, Keith, Ralph, and Gary.

Delbert loved the garden. He raised every vegetable imaginable and had been doing so whenever possible during the last 85 years. During the last three years, he curtailed the gardening because of all the bending. Delbert always loved sports. As long as he was able, he bowled once or twice a week with his teams. He also competed with shuffle board, winning trophies for both bowling and shuffle board. Much of his time was spent weaving beautiful rugs together through latch hook. Some of his colorfully intricate creations were almost four feet tall and three feet wide and required several months of work. Delbert sent them to his family and Grandchildren. They really brought smiles to their faces. Delbert also enjoyed macramé. He wove knots and line together and created hang down planters and decorator pots. The gifts were always a treat.